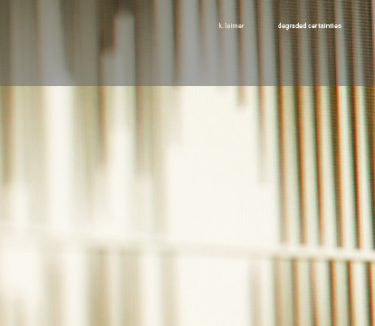 “Long-time Palace of Lights contributor Kerry Leimer follows his The Useless Lesson (2007) and Lesser Epitomes (2008) with another superb chapter, Degraded Certainties, whose six settings are all, curiously, twelve minutes in length. The tracks’ material was generated via the layering of arbitrarily ordered tone clusters and by using signal reprocessing as the principal method by which to determine the music’s timbre and form. Such production details are interesting but convey little, however, of how beautiful the six soundscapes are that Leimer and company have created. In the opening “Angoisse,” an occasional harp pluck appears amidst enveloping swathes of digital sound, while vaporous shimmer and hazy synth tones and phased slivers and lilting string plucks dominate elsewhere. A connection to classical minimalism emerges during “Common Nocturne” when sparse droplets of acoustic piano playing appear alongside gentle synthetic swells. Strings and electronics swim leisurely in deep electroacoustic seas, and ethereal, elegiac, tranquil, peaceful, and placid are just some of the words that might spring to mind as you listen to the recording’s time-suspending settings.” — Textura