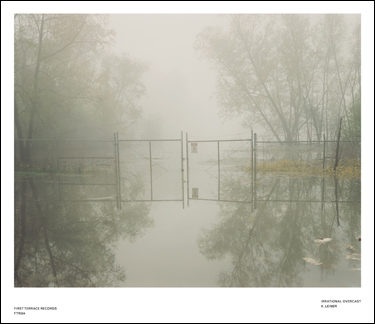 His second outing for First Terrace, following his part on FTS001, Irrational Overcast finds the composer working in a solemn & focused mode, rendering deep sonic landscapes that shimmer, sink into themselves and play host to a slowly emerging carousel of auditory apparitions.

Emerging in opposition to the sunless days & countless distresses of current US politics, each track is imbued with a refreshing sense of equanimity – in Kerry’s own words, “Authoritarian ideas that have persisted somewhere in the depths of human nature for millennia have resurfaced at a crucial moment for the environments we all inhabit — natural, cultural, intellectual and economic. The power and influence of this ideology will again prove catastrophic, as it already has for many people in many parts of the world. Authoritarianism, along with the refutation of our shared responsibility to one another and to objective knowledge in favor of personal gain & gratification consistently lead to disaster. Yet, somehow, a significant number of people seem to feel that this time will be different. To some extent they are right. It will be infinitely worse.

Irrational Overcast is preoccupied with the perpetual failings of human tribalization, of assuming dominance over nature, of choosing belief and ideology over objective reality. The impetus was brought into immediate focus by the destructive impulses and actions of such excrescences as the Trump Administration and his republicans, as well as the blatant dishonesty and bigotry of thousands more retrograde, ill-informed nihilists operating in and outside the pubic sphere.

I do not profess that music — especially an experimental, lyric-free music — can change or influence such circumstances. But this is the context in which we now live, and this has shaped the music of Irrational Overcast — a coping mechanism for living under clouds of baseless beliefs and simplistic ideologies that disfigure and stifle what is an admittedly difficult though really quite lovely world. Music, to my mind, can not clearly express anything so literal, or metaphoric, or allegoric — but Irrational Overcast makes the effort to articulate the problems created by some enduring and banal aspects of human behavior. Which is the reason it is built of lo-fi, deformed emergent or regressing or fragmented phrases, subsumed by distortion, noise, wow and flutter… and played with the understanding that there can be no more bedtime stories.”

The album is released worldwide on July 5th, on LP & digital formats, with artwork featuring images from Richard Misrach’s series of photographs documenting American petrochemical landscapes. A limited run of 30 editions will be made that include a bonus tape titled ‘Irrational Clearing’ – featuring two beautiful long form tracks from the Irrational Overcast sessions.