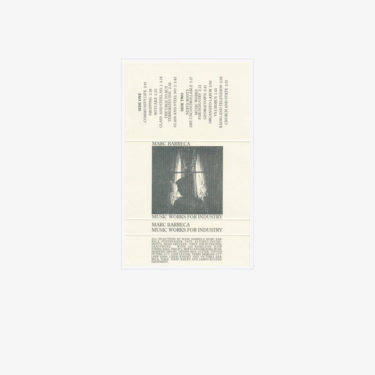 Pete Swanson’s Freedom To Spend label unearths and dusts off this total killer from Marc Barreca for this handsome, much needed reissue. With 4th world pioneer Marc Barreca’s ace solo debut Twilight now back in circulation thanks to K. Leimer’s Palace of Lights, Jed Bindeman and Pete Swanson’s promising new label Freedom To Spend present Barreca’s stranger successor album Music Works For Industry (1983) on vinyl for the first time. As opposed to Twilight, which found Barreca working solo with Eno-esque systems-based music, Music Works For Industry finds him taking contributions from members of Seattle’s close-knit community of electronic explorers, and working them – albeit as unrecognisable from the original source – into a series of playfully spiky creations as porous to influence from synth-pop, industrial as ambient music, and sounding much rawer, primitive, skronky and surreal than most else coming from the 4th world nodes at that time. Rendering the original tape in its entirety – no edits or altered track list – the session slips and slides between cute, almost cartoonish pulses, hooks and voices in “Community Life” to rudimentary, swampy funk chops in the closer “Church and State”. What happens in between is akin to the soundtrack for some Canadian TV for schools programme or a series of calisthenic exercises for post-punk and new wave mutants; an assembly of off-grid rhythms and dislocated sounds kerned, smudged and processed to recall a very early iteration of the ‘dances’ from Rashad Becker’s Traditional Music For Notional Species or a colder, distant precedent to the kind of crooked creations coming from Luis Delgado and Eugenio Muñoz’s Mecanica Popular studio. Huge recommendation.

Community Life
Shopping
Hotcake
Glass and Steel No.1
The Urge to Buy Terrorizes You
Glass and Steel No.2
Nerve Roots Are Uncontrollable
Music Works for Industry
Georgetown
Organized Labor
Vs. Chorus
Radio and Television
Church and State